The dogs shouldn’t need feeding this week. Why? They’ve been eating chickens and a lot of them. It’s like a satirical version of the children film “Chicken Run”.

First we fix a few holes on the Chicken Coup. Few bits of old Chicken wire and off we go. Thinking jobs a good’un and we just add Chickens and eggs come out the other end. Seems we were foolishly confident now. The chickens were bought by XY, from a dangerous end of town, and then placed in their new sweet Chicken home.

I went to see them the next morning. See how they had faired overnight in their new luxurious hotel. By looking at random feathers on the grass I would say not well. As I arrived at Hotel Hell it would seem all Chickens had been gobbled up. Not one was left. Dogs looked a bit sheepish I thought. I couldn’t quite believe it. The dogs had worried a piece of chicken wire open near a corner post and gotten in.

Dogs were reprimanded. Chicken carcasses that were left were tidied up and take 2 was planned. XY and I visited nearby hardware store. We bought newer thicker looking chicken wire and become overly confident.

XY and I made it back to the more dangerous end of town for more Chickens, and a nice Chinese lunch. This place, the chicken buying place, is a blog entry in itself.

I, with help of Kiwi Rob applied new Chicken wire to said Chicken hotel and we both looked on at our resplendent new reinforcements. No Dog, no matter how big, would get through all that chicken wire and nails and stuff. I even remarked that if they did get through this new defense then they deserved to eat them all. Words be damned.

The chickens were booked into Hotel Hell and all were put to bed. The same dreaded walk the next morning and some suspicious new feathers near the veranda of XY’s house put me on high alert. No. No. How could they. It was like bloody chicken wire fort Knox. As I arrived I saw four or more entry points into the hotel and no live chickens. Dogs mega sheepish now. So much so they would have grown wool and buggered off up a Scottish hill if they would have.

The dogs actually gnawed their way directly through the chicken wire in one place. All adults were amazed by this. 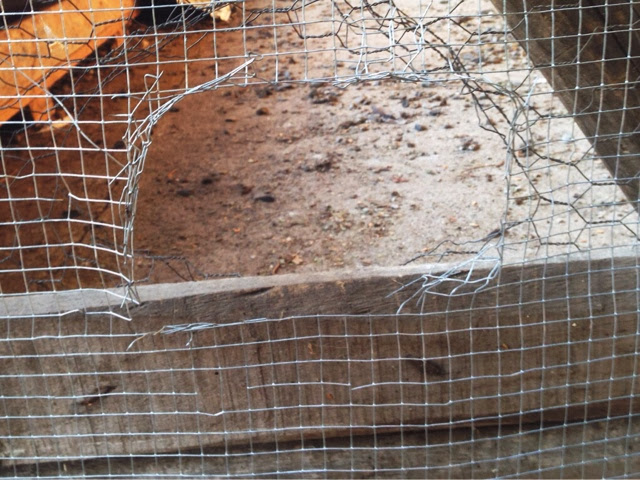 Didn't this hurt the dogs?

Hotel Hell 3 is now in the planning and it involves steel bars this time. More Physical Security than a bank branch coming your way.

Newer Post Older Post Home
Subscribe to: Post Comments (Atom)
Welcome to the bl0g of Ian Walker-Smith. Ian is a father and information security professional. He lives in Santiago de Chile but is terribly British.